Skip to main content
Posted by Veronica Boulden on August 05, 2011 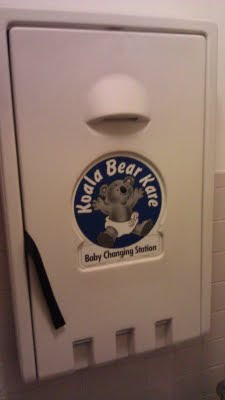 I saw this in the bathroom at Silus Bronson and I just had to take a photo of it. I was thrilled. I remember going to Waterbury's library for the first time when Norah was still in diapers (over four years ago now). Among a few other disasters that occurred while we were there that first day, Norah pooped and started to cry and after waiting in a long line upstairs to ask the librarian to unlock the bathroom door for me so I could change my baby, the librarian proceeded to open the bathroom door and let me look in to find that there was no changing table at all.

When I saw that there was no changing table, I looked at the librarian with a question. The librarian didn't seemed surprised. I asked him what I should do. I was thinking, "Isn't it his responsibility to offer a solution? Aren't librarians supposed to be helpful? Doesn't every library have a changing table standard?" The librarian gave me a blank stare.

So while the librarian watched, I acted decisively. I took off my fluffy, winter coat and laid it on the carpet floor in front of this bathroom, the door still standing wide open and I changed Norah there. I threw the diaper away in the bathroom trash can. The empty trash can under the sink was all the use that bathroom was to me then.

The librarian looked at me like I was crazy, not so much for laying a baby on a coat on the floor to change her as for bringing her to the library at all. I remember thinking to myself, "I can't be the only mom with a baby who comes to this library to get herself books... Right??" I may not have been the only one who ever went there. But, because of their policies and practices, I wouldn't be surprised to find that I was the only mom who ever went back.

That was then and that was years ago. When I talk about this library to my friends, I tell them that I continue to go to there even though they aren't always family friendly because I think that over time a place will actually change little by little to fit the people who frequent it.

And now, after years of asking them to unlock this door for me and my kids: a potty training three year old who has to go... now!!! who eventually grew into a four year old who doesn't stop talking and who asks the librarian to go and who says "Thanks" when he opens the door for her, who grew into a six year old that they know by name with a cute baby sister who is still in diapers... I am thrilled to see that the library has installed a changing table!!