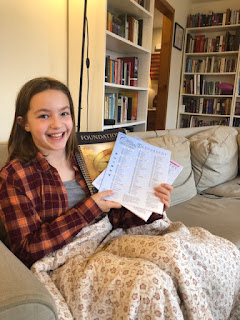 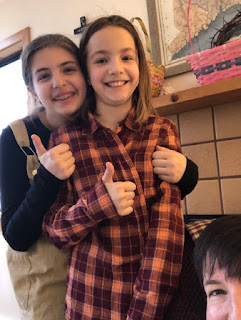 This means she sat down with me, her parent, and recited all the Foundations Memory Work for this year, every subject, without any errors.

Even for Adele, who knew all the facts seemingly backwards and forwards, it was a demanding process to prepare for this test. Parents have to ask the questions in a certain way; Students have to answer in a certain way. The test has to be done in one sitting, so all this means that even kids who really know the material have to build up endurance and focus to just manage the formal testing process and recall all the answers quickly enough.

Disclaimer: Honestly, I don't care two bits about formal grades or test performance at this point in my homeschooling journey, especially now that my oldest got into college/s and did well throughout all that is involved with that process. My kids work through their math texts, for example, but I only rarely make them actually use their separate math test booklets. Why make my student sit down for a test when I have checked almost every other page of their math text and I already know they are mastering the concepts. There is no need for a teacher to send a number grade home to communicate mastery or failure to a parent. I'm both the parent and the teacher, so I already know they've mastered the concepts and done the body of work necessary to move on. I am constantly assessing their work naturally as part of our homeschool day together, so when Adele expressed a desire to do Memory Masters this year... I had real inner conflict.

We memorize the Classical Conversations Memory work, but the facts become a natural part of our family culture and conversation, since we all know them and refer to them often. Even Dad knows them. But the formality of this test is off-putting to me, since it feels so artificial and sterile to for a human parent to make her human human student sit for over an hour answering prompt after prompt in a very formal way...

Adele is that sort of person. She has a different personality than my other kids. She really enjoys pushing herself. (This is the same kid who I found her climbing our bunk beds in preschool, and when I told her, "You can't climb the bunk beds," she protested and said, "But Mom! I'm good at it." And she really was. You should see her run. It's a joy to watch her drive herself forward, and her face beams joy with the exertion. This is exactly why she's still in basketball lessons even though the regular season ended for her sisters. She, specifically, begged to keep going.) And I have been in Classical Conversations as a parent for almost ten years, and I've even been a Foundations tutor and director before, so I know some of the students actually enjoy the challenge and are invigorated under the testing. So when Adele expressed the desire to do Memory Masters not just once, but again two, three, and even four times, I felt an obligation to support her as the parent in order to try to make it happen. And I did. We sat and worked through the material in longer and longer portions until it was mastered in a way that would "pass" the test. Then I gave her the full test and she passed it!

We asked a beloved lady at church to administer the next test, someone Adele loves, someone who loves Adele back, someone Adele will be comfortable singing the songs to, etc. We're waiting to hear back about whether she can do it.

In the meantime, we're breathing easier and celebrating. But we'll also keep practicing everyday to stay sharp/ get sharper.

She really didn't know if she could do it. She expressed a lot of frustration and doubt. But we kept promising each other it was going to be okay no matter the outcome if she simply did her best, trying once a day to pass a parent proof up to the deadline we set. (We set a firm deadline, and we stuck to it. If she didn't pass by then, she couldn't go on, etc.)

So as difficult as the test preparation was, this was actually more natural and positive for her as a unique person, so I let her go for it, then I encouraged her to keep going even right up to the deadline when it looked like she might actually get right up to the deadline and still fail to pass. I confess I almost let her quit on herself in order to protect her from severe disappointment over something as trivial and artificial as a test. But I see now that quitting might have been the failure. She has a sweet, humble pride within her heart over what she accomplished, and her sisters are making a fuss over her, because no one else has ever been willing to work so hard to do Memory Masters. Now I'm glad I let her keep going/ encouraged her to keep trying to the "end." I think she learned a valuable lesson about what she is capable of, and so did I.  She knows how hard it was/ is for her, and she now she knows she did it/ can do it after all.