Skip to main content
Posted by Veronica Boulden on December 25, 2008 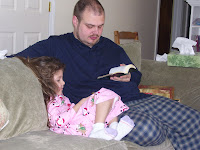 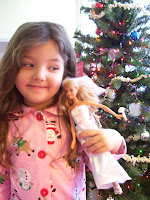 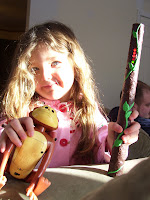 After french toast with maple syrup and powdered sugar, we read our Advent book and the Scriptures for Christmas morning. (With a second glance, I noticed all the tissues in the background of the first picture and this makes me chuckle. Those background details will be heartwarming evidence to me in years to come that all of us were tenderhearted about Christ. We are all criers, though I do it more than anyone in my family, especially since I am pregnant.)

Then we opened gifts. You can see above that Norah's Barbie got a wedding dress and we've been enjoying hiding and using the wand to find our monkey. We also played or took turns with Norah's games: Match Up!, Perfection, The Ladybug Game and Hyper Jump. I'd recommend any of these for other kids Norah's age. I also got Gun Slingers for Dwayne, just for the fun of it, so we all played that, too, and got laughs from the sound effects (western showdown music and amigos with accents) and we laughed at the fact that Norah did better than me on her first try. She took no aim nor showed any mercy, just unloaded her pistol on the bandits.

Later, we baked the ham we were sent from Dwayne's boss, a traditional green bean casserole and homemade mac and cheese. The ham was so good, Dwayne said, "I'd be plugged back into the Matrix for this!" and he was right. I've never tasted anything so good. We cut it up and I froze at least six quart sized bags of pieces to use in soups and beans later this winter.