Skip to main content
Posted by Veronica Boulden on December 17, 2008 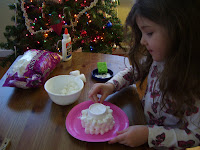 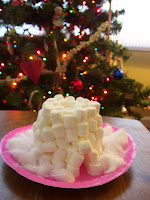 Norah made a marshmallow igloo today.

These little projects not only help her problem-solve and practice coordination, they also allow her to process and retain the information she's heard about igloos and Eskimos so far. She even reminded me to help her leave a little hole in the top "to let out the stale air," something she was told the Eskimos will do periodically.

Cut an inch or two off the rim of a small Styrofoam cup, turn it over and hot glue this shallow bottom of the cup to a paper plate. (Norah picked a pink plate left over from her birthday party.)

Fill the lid or bowl with liquid glue and use the sponge to "paint" the outside of the cup with glue. This extra layer of glue helps the marshmallows stick to the sides of the cup, making the whole thing more likely to stay up.

Shape a door for the igloo out of five marshmallows. Stack two on top of each other, leave a space, stack another other two and then use one marshmallow to "bridge" the stacks in the middle. Dip the marshmallows into the liquid glue as needed. Allow the door to set while your child stacks the marshmallows around the cup, layer by layer.

When you have worked your way up the cup to do the roof, just use the sponge to dab on more glue and place the marshmallows in a small circle on the top of the cup. Then, you'll need to add one more layer of marshmallows around the top of igloo, to cover the uppermost edge of the cup.

Next, use another five marshmallows to make another door right in front of the first one. This will give the traditional appearance of a narrow, curved entrance to the igloo.

Use the sponge to spread glue on the plate. Tear up cotton balls and press them on the plate to make it appear like there is snow on the ground around the igloo.
Homeschool