Skip to main content
Posted by Veronica Boulden on December 02, 2008 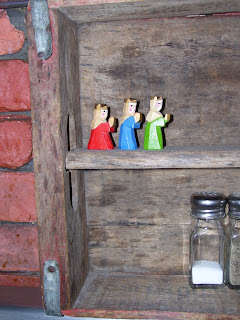 Dwayne does this throughout every December. It's sort of a family joke.

Before I get up in the morning and he leaves for work, he moves the wise men away from the Nativity sets, hides them somewhere else in the house. He does this because they wouldn't really have been at the stable on the night of Christ's birth; they still had a long way to travel before they got to Bethlehem. The Bible says they visited "the child and his mother" in a "cottage." So, they must have arrived some months later when Mary and Joseph were settled in a home somewhere.

But, for the sake of tradition (and the hope that Dwayne will take the bait I am leaving), I place the wise men near the manger scenes we have around the house anyway. And, out of his passion for what he calls "Biblical accuracy" (and to make me laugh when I find them elsewhere), Dwayne won't leave them there and hides them somewhere in the house. Once, last December, it took me a few days to even notice they were gone and find them again.

Yesterday, I found this set of wise men on the old Coca-Cola crate I use as a shelf over our stove. When Norah saw them there, she was completely confused. I explained that her daddy does this every year cause the wise men weren't really at the stable with Mary, Joseph, Jesus and the shepherds, etc. But, after a minute of the lecture, I saw the glazed look in her eyes and knew, for now, the lesson would be useless. So, I told her that her daddy does this to be silly. To this, she rolled her eyes playfully, held out her hand and sighed, "Give them to me, Mom. I'll put them back where they go." And they are back where they go, for now.
Humor