Skip to main content
Posted by Veronica Boulden on December 11, 2008 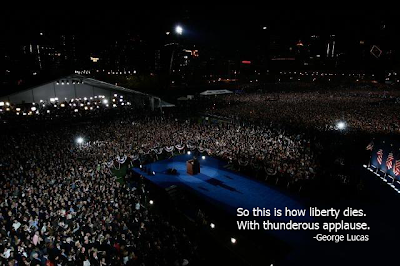 Sometime after the election, I read the quote on the bottom of the photo above. Immediately, an image of the crowd at Grant Park came to my mind.

Norah and I came home from the gym tonight (I teach water aerobics on Thursdays) to find Dwayne watching I Robot. I watched the rest of the movie with him and was struck by how often the lead character's attitude is similar to my own in today's political climate.

If you want to know how many political conservatives feel when some of today's leading democrats speak, watch the movie again. Will Smith's character is a good picture of a real conservative's doubt and suspicion.

While government leaders seem so eager to begin legislating for the people's good, I fear the outcome of so many new laws will result in so much less liberty that America will become unrecognizable and uncomfortable for all of us, even for those who support the leading party's agenda currently.

But, I am sober for now and sincerely hope I am proven wrong.
Political