Skip to main content
Posted by Veronica Boulden on December 16, 2008 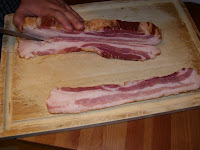 You learn something new everyday.

We got another gift package in the mail from Dwayne's company. This one included a huge picnic basket from Virgina holding a ham that barely fits into our fridge and further down in the box were two slabs of bacon, a block of cheddar cheese and a literal keg of maple syrup.

So, now my kitchen actually does resemble the attic in Little House in the Big Woods

Tonight, we had our first experiences with slab bacon.

We thought for sure that what just appeared to be one huge chuck of meat was really just a tall stack of thinner slices. We said things like, "The slices must be wrapped so tightly that we just can't see the lines between them, etc. etc." as we squinted and looked at the hunk of meat in the package. Oh, we were so naive.

It was, quite literally, a solid slab of bacon. You could almost picture where it was on the hog's back, originally. We did our best to cut it without using a wood ax from the garage, but it ended up looking more like strips of country ham than the almost transparently thin slices of bacon we get from the grocer's.

Dwayne joked that “This must be how the other half lives.” And, we really did feel like bumpkins, especially after we read that we were supposed to remove the rind before cooking... Yeah. We found that out only after dinner, when we looked up recipes to use for the other slab sitting in our fridge. That was about the time that our stomachs started to turn.

But, ignorance is bliss. The meat tasted so good, it was nearly sinful. I mean, this must be what the pagan temples were frying up back in the day and why some folks' consciences wouldn't allow them to even eat meat. To own the truth, I enjoy my freedoms in Christ as much as the next believer, but I'm not sure I can proceed to eat the other slab with any faith at all!