Skip to main content
Posted by Veronica Boulden on December 14, 2008 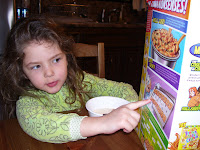 Norah's newest thing is to "read" the back of her cereal box in the morning. I never suggested she do this, so I think it's just great that she asked on her own. She said, while still chewing, "Ma... Can you pass that box to me...I wanna to read the back..." It may be silly of me, but I was so taken back by this that I took a photo while she was counting how many toasts were on the illustration. I didn't really think about it again till I looked over yesterday morning and saw her dad kind of hunched down, reading the back of his box while eating his cereal!

I really cherish the things I've seen Norah begin to do that are so common to humanity. To me, it's a privilege and a joy to have a front row seat to the little and often impolite things she does that just come natural to everybody: like leaning to one side to pass gas, for example, or licking her fingers after eating Cheetos or slurping the sugary milk left in her cereal bowl... it is fun to watch her grow up and of course, I realize it is my job to teach her (after laughing a little) that some of those things are considered rude in good company.