Skip to main content
Posted by Veronica Boulden on December 31, 2008 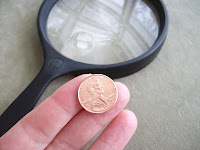 A penny saved is a penny earned.
-Benjamin Franklin

Norah's learning about money right now; pennies are worth one cent, nickels are worth five, etc.

We took a magnifying glass to one of our brand new pennies today and with the help of educational websites, we discovered a lot of neat history we usually overlook.

If you have a penny minted in 2008, you can see the initials VDB on the bottom of Lincoln's sleeve. These initials are infamous and there's a rumor about their obvious placement as part of the design...

They stand for V.D. Brener, the man who designed this Lincoln profile used since 1909. But, interestingly, V.D. Brener was not the Chief Engraver of the US Mint at the time, Charles Barber was. Usually, the Chief Engraver always got the honor of designing new coins... So, it is said that Barber went behind the scenes and insisted that all of VD Brener's initials be put on the coin in an effort to make Brener look arrogant about his work and take personal revenge for not being given the honor of designing the new coin himself. Am I sharing history here or spreading gossip? I may never know, but the Lincoln penny replaced the "Indian Head" that was on the front of the coin before that.

The current design on the back of the coin has been around since 1959. It replaced the design with two wheat stalks on the back. (I have a penny like this from the forties. I almost used it at Burger King the other day ...Yes. I am that lady, who holds up the line by paying in exact change. But, I noticed that the back of the penny was unique and in the nick of time replaced it with another penny before I got my burgers. I am glad I saved it, since now I know why it looks so different!)

The words on the back, "E Pluribus Unum," mean "Out of many, one" which is fitting for a coin that is worth one cent.

You probably know that Lincoln's profile is on the front, but did you know the building on the back is the Lincoln Memorial dedicated to him? And, if you look very closely at it, you can see a tiny Lincoln standing in between in columns, just where the statue of Lincoln sits in the real memorial in Washington DC.

No kidding! Take a look! It's a little spooky.