Skip to main content
Posted by Veronica Boulden on December 13, 2008 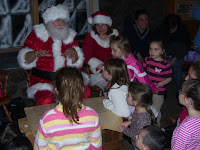 I overheard a fraction of a conversation Norah was having with one of her toys in the Jeep. She was saying, "We believe...d in Santa... the other day."

I got a kick out of the fact that Norah changed verb tense in mid sentence. And, right when I thought she was done speaking entirely, she added, "...the other day." That's when her voice trailed off and that's when I broke into spontaneous laughter.

The picture above was taken at our neighborhood's Christmas party. (See the blog entry for December 7 for further explanation.) You can see Norah in the bottom right hand corner of the photo listening to Santa tell the story "The Night Before Christmas."

We're Christians, so we focus on Christ at Christmas. Go figure. But, we didn't foresee the problems this would cause any child, like Norah, with any set of parents, like us, who live somewhere within, say, the continental United States.

I really don't question parents who include Santa in their holiday celebrations. I don't feel contempt for them and I am not righteous about our sincere attempts to keep Christmas sacred. While I do think Santa is a distraction, I don't treat him like I would if the letters in his name were rearranged and he were holding a pitch fork rather a bag of toys.

Many of my closest friends tell their children Santa brings the toys. Who cares?! I am just venting about how inconvenient it has been for our family because we decided not to. Many people are polite to us, but I have come to resent the others who get terrified and almost step back in horror because our daughter isn't excited about Santa. She loves him like she would Barney. He's big and soft and friendly, but no one ever expects her to believe Barney is real.

She sees Santa as if he didn't have a bag... and to her, he doesn't. He really would have no love from anyone without the bag. No child in their right minds would ever welcome a fat man in a funny red costume to break into their homes while they slept if he wasn't bringing them Ipods and Hotwheels. So, I wish no one would ever pity our daughter. She has plenty of the same superficial, materialistic, fleeting joy other kids have on Christmas morning. She just gives us the thanks... or criticism when she is done opening her gifts.

But, one of the things we said to coach Norah not to question Santa's authenticity in front of the other kids at the party that night was, "Tonight, we believe in Santa."

I guess that worked. Now, she'll have some vague memory and slight confusion about a time when she and her parents did believe in Santa, but then, they didn't all of a sudden...